In the month of February, I was working on a series for Black History Month. Unfortunately, midway through the series, the Rockstar Anthro Pup, died. I took a couple weeks away from writing while working things out. Before I finish the series, I wanted to write a tribute to my sweet Dexter and Alice.

On February 14th, 2019, I had a wonderful day! On that day, I was happy to work from home because my best bud, Dexter the Rockstar Anthro Pup, had not been feeling his best lately. The prior Monday, he had gone to the vet with my partner, Damari, but the vet said Dexter appeared to be healthy, just old. I had to take that diagnosis, but I knew something was off. I always knew when something was off. Unfortunately, when it came to Dexter, I was never wrong. He and I were together for 15 years.

I remember when I first picked him up.

Dexter Worthington was born on a farm in Inman, SC on December 16th. When he was about 5 or 6 weeks old I drove out to the farm to see him. Well, I wasn’t seeing him specifically. The farm belonged to the parents of a friend of mine and her dog had just given birth to three little Pomeranian boys. She asked if I was interested in one, so I went out to see them. Inman was about an hour drive from Greenville, where I lived at the time, but I was happy to visit. From the moment I walked in and looked down into the playpen of puppies, I knew Dexter was family. I picked him up and he yawned deeply. I was in LOVE. He wasn’t quite old enough to come home with me then, so two weeks later, I would make that drive again to go pick him up.

I wasn’t ready. The only thing that I managed to get was a new camera. I had to be able to take a ton of pictures of him, right?

(He has a first- year baby book, BTW)

I planned to go shopping and get crates, toys, food, etc., but a snowstorm was on the way and I decided I’d rather get him sooner than later. When I arrived, Dexter was bigger than before but still tiny, and his brothers were laying on top of him in a pile. I wrapped him in a pink fleece throw and put him in my purse. That was our beginning. 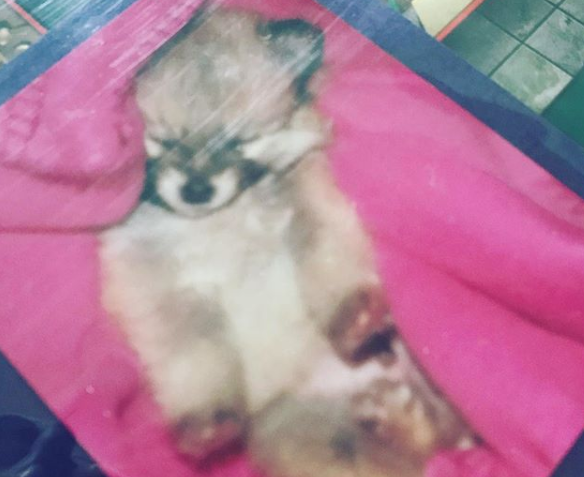 Over 15 years, Dexter was my constant. My ace. He helped me study. We earned three degrees together. He stayed up with me for late nights. When I traveled, he was there when I returned home. He slept by my side when I was sick, gave me kisses when I cried. We had long conversations together. He spoke a language that I understood clearly. 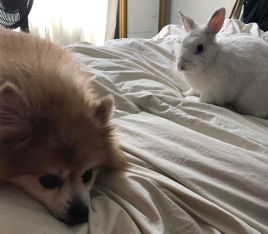 Five years into our journey together, friends gifted me a white bunny, I named Alice. Alice became Dexter’s pesky little sister. He didn’t really care much for other animals, but he made things work with her. These two kept me busy and made my home warm. They made the world softer, more tolerable. A couple years ago when I sunk into a horrible state of mind, when all else failed, I thought of them and what they needed from me. I could push through another day.

Last July, I made the gut-wrenching decision to leave Alice with my mom for a while. She needed more attention and a bigger place to play. She also loved being at my mom’s because she was super spoiled. I promised I would come back for her soon. Then life happened- new jobs, crazy schedules, etc. and before we knew it, it was fall.

Unfortunately, on Thanksgiving night, I received a call that she was dying. My mom called me on FaceTime so that I could see her one last time. As the call ended, my sweet 10-year-old bunny took her last breath.

I cried for several days- looking at her empty cage, a box of food and thinking of the promise that I wasn’t able to keep. I never brought her home. I felt like the world’s biggest turd, but Dexter, my sweet boy, comforted me. He seemed to understand what happened or at least felt my sadness. He stayed close to me. He was good that way.

His birthday and Christmas was coming up. I decided to make it a big deal! Lots of gifts- new harness, sweaters, favorite treats, new carrier bag, snow boots, personalized Santa bag, a humidifier, and alphabet ornaments- ‘A’ and ‘D’- would cover my tree in honor of my two sweet babes!

Time moved on until it didn’t.

I knew that Dexter hadn’t been feeling well, but we always bounced back. On Valentine’s Day, he had been a little more needy than normal. He was having more seizures and breathing harder. I was frustrated and scared. I called his vet, but they couldn’t scan his heart any earlier than March. Perhaps Damari was right- he just needed some more time for the medicine to work.

That evening, we all put on our coats and Dexter excitedly got in his carrier. He wanted to go on a trip. This was a good sign. I gave him a few small pieces of steak and he hungrily ate them. Good sign. We walked up the street and got fresh air. Then ordered dinner to eat at home. For Dexter, we ordered his favorite, steamed shrimp! He ate all six and we put him to bed. After a couple of hours, we joined him in the room to sleep.

At 4:39 AM, I heard Dexter begin to cry. He was having a seizure. He had seizures before and sometimes they were like this. They sounded scary, but we would keep him calm and he’d recover in under a minute. I jumped out of bed to run to him, kneeling on the ground and calling his name gently.

He started gasping. He’s never done this before. I held his head. Damari was saying, “Come on buddy! Come on Dexter! You’re alright.”

His little body began to contort. His front legs fully stretched. Then his back legs.

I called him, but he couldn’t hear me.

Then suddenly everything was still.

Damari shook his body. Nothing. His little eyes opened, but no breath or heartbeat. I screamed. Damari went to the living room. Then told me to get up and put on my jeans.

“We need to go! We need to take him to the hospital!”

I stood to my feet and yelled at him. “I need my mom!”

I ran to the phone and dialed her number. No answer. I looked at my phone. It was 4:43AM. 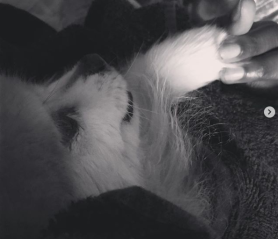 I walked back to Dexter and fell on my knees. A navy blue bath towel laid beside him. I picked up his body and laid it on the towel. I wrapped him up the same way I had done many times before after a bath. I sat on my bed and held him. I took pictures of his serene face. I held his paw one last time.

I rocked him as I felt his weight growing heavier and his body getting colder. I wanted to remember everything. I’m not sure how much time passed, but eventually, I wrapped him in his red and blue plaid throw and laid him on the ottoman beside my bed where he could often be found eating a snack or licking ice. He would stay there for a few hours until it was time to bring him to the vet so that they could cremate him.

This is the scene that has been replaying in my head for hours every day since it happened. I guess I’m trying to understand what went wrong, where I failed. I think that may be a scientist thing- to obsess over a problem trying to think of solutions. Only there is no solution to this- the outcome is final.

Coming home felt awful. Losing Alice was hard, but Dexter being around made things better. When we arrived in our empty apartment, I was forced to mourn Alice all over again and Dexter completely. Everything felt cold and unfamiliar. My joy, my comfort, and my attention were wrapped up in those little furballs. It’s only been a few weeks, and the traces of their existence live all around me- an almost finished bag of Dexter’s treats lay on my floor, his placemat, his empty bed. Alice’s wooden chew toy hangs from my wall. Two little boxes filled with their ashes sit on a shelf in front of my bed.

Because Alice was a birthday gift and adopted, I didn’t know her actual birthday, so she celebrated on March 7th. In just a few hours, our birthday will arrive. I always made such a big deal of my birthday, but now I am dreading every minute that moves closer to midnight. I will spend my first birthday in 15 years without my aces, my best friends, my loves. And so, I write in hopes that, for my birthday, if I pour my sadness onto the page, and spend this day remembering how fortunate I was to have known such pure joy, beauty, and love for as long as I did, that I will begin to move forward with Dexter and Alice in my heart.

They weren’t just “pets.” Ugh, that term is so insufficient. I hate it. They shaped my life because I had them my entire adult life. It is what it is. It sometimes seems silly that I am taking this so hard, but I’m going to stop apologizing for how I feel.

So, here’s to Dexter and Alice who listened to me go on and on about anthropology, and whose conversations eventually became known as the blog called The Rockstar Anthropologist. 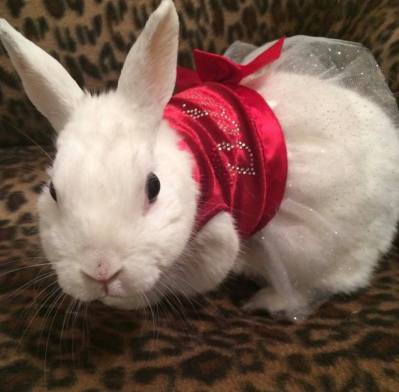 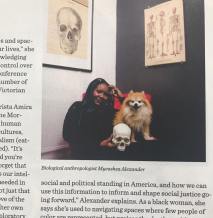 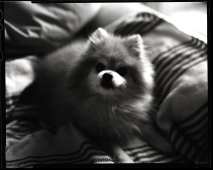 Film Portrait of a Loved Dog by Damari McBride 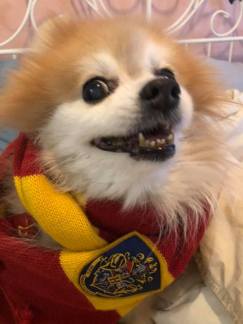 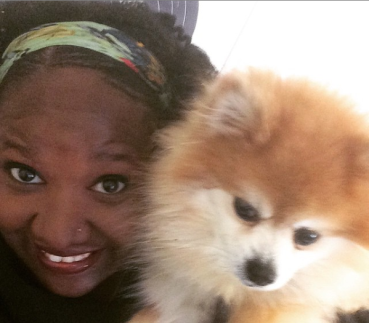 Mom and Dex! You were so loved baby boy! 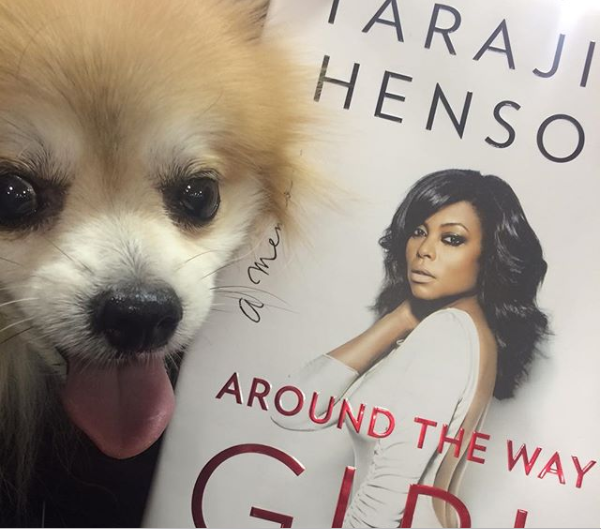 That time Taraji Henson’s manager stopped us, gave us a copy of her book and take it to her to sign so that she could see Dexter’s cuteness!

This site uses Akismet to reduce spam. Learn how your comment data is processed.